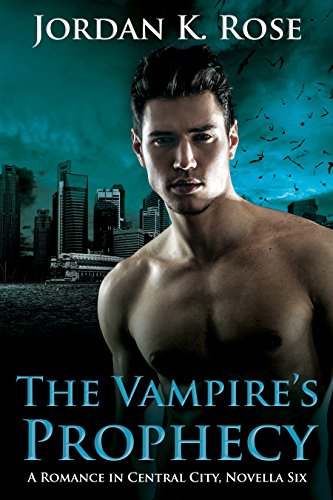 Loneliness can cause a man to make stupid decisions, like walking straight into an obvious trap. But after weeks of internet chats, sexy text messages, and sweet phone calls with the lovely woman posing as bait, Gabriele Barone has no choice but to see this thing through to the end even if that means giving up his freedom to save her.

Hunger, frustration, and watching her father’s agony over what happened twenty years ago in Panthera Laboratories has driven Aurelia Pontes to drastic steps. Against her father’s wishes and in absolute secrecy she joins forces with the owner of the laboratory to capture a third generation vampire for experiments that will reverse vampirism and lift the black cloud over Central City.

Falling in love with the enemy may be a bad decision, but joining forces with a man so powerful he drove the city into ruins will change Aurelia’s life forever. Vampires aren’t the only specimen Panthera likes to use in experiments. Pretty, unknowing women work well, too.

Can Gabe save the life of the woman he loves, or will she become another of Panthera’s forgotten victims?

Gabriele slammed the door to the master bedroom and ripped the clothes from his body on his way to the private bathroom.

How had this happened? How did a vampire with more than two hundred years of experience, solid survival instincts, end up trapped in a situation like this?

He’d been duped. Had. Tricked.

Steam rose from the hot shower, heating the bathroom and making the sweet scent of sun-kissed skin and the ocean waft. As if compelled by some seductive voice, his hands rose to his face, and he inhaled a deep breath of Aurelia’s scent.

Every cell in his body responded, sparking to life and tingling with unmet need. An ache churned in his gut. It was a feeling so similar to the pain of the vampire’s thirst that it startled him to realize the connection.

Over the past few weeks he’d felt weaker hints of this drive, a wild need he kept controlled. Every time he anticipated a call or text from Aurelia it flared. But each time he tamped it down, soothing the craving by reviewing their old text messages or viewing her picture.

“She’s become an addiction. Like the need for blood.” His hands dropped to his sides.

He hadn’t felt this gnawing in so long he’d all but forgotten what it could make a man do. His fangs ached with the need to be driven into someone’s neck.

Someone. Not just any someone. Her. Aurelia. He needed to feed from her.

You’ve earned the right. The words weaved through his mind in the same wicked tone the thirst had always used. Take her. Who’d fault you?

The voice was just as vile as he remembered, tempting him in ways his conscience denied him.

Mark her. Make her yours. Let the whole world know.

In the back of Gabe’s mind he heard Aurelia’s voice from all the calls they’d had—her soft, accented voice. Then the memory of how moments ago she moaned his name, how good, perfect, and right it felt to hold her. The way her soft curves felt against him, the scent of her, the heat of her grinding on his leg.

Every muscle in his body burned, as if some invisible current coursed over him as he fought the instinct to go to her, to take what he wanted for his own.

“No.” He leaned forward, pressing both palms flat to the tile wall and closing his eyes, letting water beat down his back. “I won’t. She’s not truly mine. She’s the enemy.”