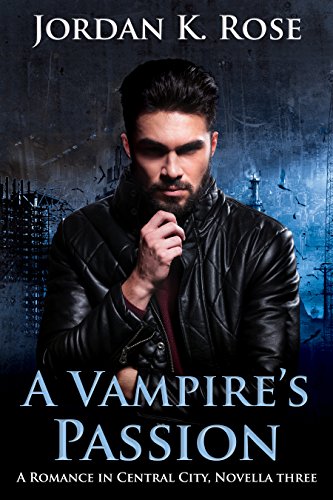 Homeless are disappearing. There’s an evil army on the rise. Are the two connected? Brandt’s determined to find out.

With The Vampire Guard on high alert Brandt focuses on his reconnaissance mission to stake out Menhaden’s, a new upscale restaurant in the hub of Central City. He finds more than he bargains for when he meets Rachel, a petite waitress with a huge attitude and a stubborn streak to make any man crazy. She also possesses the most mesmerizing blue eyes he’s ever seen in the century he’s been on this earth.

Rachel has had her fair share of hard times. She knows what it’s like to live on the streets, fighting for her next meal and failing more often than not. When her friend becomes one of the missing homeless, she will stop at nothing to find him. That includes listening to the tall, dark, and dangerously arousing man who keeps getting in her way. His commands border on the ridiculous and she refuses to heed them, regardless of the so-called danger he claims she’s in. She knows how to take care of herself and anyone else who comes along.

Brandt is convinced Rachel is deep in the thick of Panthera Laboratories’ plans and doesn’t even realize it. The longer she’s on the street, the closer she comes to being part of the twisted experiments he’s there to stop. Try telling her that. She refuses to follow orders, no matter how many times and ways he tries to convince her. Is he losing his power as a vampire? Or is her allure more powerful than his will?

There’s only one way to find out.

Facing Garrison and with his back turned to her, Brandt couldn’t see where Rachel was, but he could feel her. She was only a few feet from them and she was afraid. Her scent grew syrupy sweet as her anxiety level rose.

“I only want to help. Please don’t be expired.” Her fingertips grazed Brandt’s arm as she reached for the wall.

He glanced to the side, and his gaze met hers. He’d easily been able to see how pretty she was across the street, but standing beside him where he could appreciate every fine detail she was beyond beautiful.

Errant strands of hair floated around her face, having come loose from the thick ponytail hanging down her back. Long eyelashes blinked behind black-rimmed glasses. High cheekbones led to rosy cheeks then down to slightly parted full lips.

Sharp pangs pounded in Brandt’s chest. Then his heart stopped with a sudden thud. Four seconds later it began beating again only to come to an abrupt stop three beats later.

Her gaze went from Brandt to Garrison.

“Huh!” Her eyes widened. “What are you doing to him?” Not waiting for an answer, she reached down and picked up a broken chair that had been discarded into the alley. “Get off him.”

The chair crashed over Brandt’s back twice before he could gather his thoughts to understand what was happening. With the third whack he toppled against Garrison.